The Japanese company Mitsubishi Electric Corporation has opened the world's tallest wind test tower in Inazawa.
The construction cost of the 173 meter structure was $ 50 million. The building will be tested super-fast elevators, which will be used in the future in the highest skyscrapers in the world. Recall that the fastest lifts in the world are those found in Taipei 101. The lifts built by Toshiba are moving in this 508 meter building at speeds up to 61 km / h. They are equipped with special pressure maintenance systems to prevent the "cracking" of eardrums in the ears. 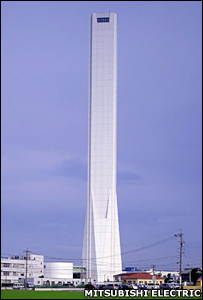