Sixth anniversary of the attack on the World Trade Center

Today marks the sixth anniversary of the tragic attack on the United States of 11 September 2001. During the bombing, two towers were destroyed World Trade Center and several adjacent buildings, resulting in the deaths of more than 3,000 people. The whole world was mourning that day.

Today, after 6 years, the preparatory work of the new complex, which will be built in the place of the demolished buildings, has already begun. The names of designers and their ideas for land development are known.

The main and at the same time the highest building of the newly created complex, the total cost of which will amount to over USD 12 billion will be the WTC 1 tower, known as the Freedom Tower project of Daniel Libeskind. The height of this America's tallest building will be 541 meters (1,776 feet), a reference to the year of signing the United States Declaration of Independence. The size of the building without the spire will be 417 meters, exactly the same as the height of the destroyed World Trade Center towers.

Agency coordinating the WTC reconstruction emerged in 2003 the winner of the competition for the design of the monument commemorating the WTC attack, the winners were Michael Arad and Peter Walker.
The monument will include a park, in the center of which will be two square water pools with a depth of 9 meters. The pools will be located exactly on the foundations of the destroyed WTC towers. The park will also have numerous fountains with gushing water.
Underground will be a place commemorating the dead, where through the glass panes you will be able to see the interior of two pools located on the foundations of destroyed high-rise buildings, there will also be a list of all victims of the attack.

The complex will also include an underground museum, a renovated communication station from 1903, a shopping center, an art gallery and the existing 228-meter WTC7 tower designed by David Childs (S.O.M.).

According to the assurances of architects, the new World Trade Center will be built according to the highest security standards. Thanks to the combination of the most outstanding minds, companies and talents together with security, beauty and simplicity and pure form will go along. The Freedom Tower is to be commissioned in 2010, and by 2012 all projects of the complex should be completed. 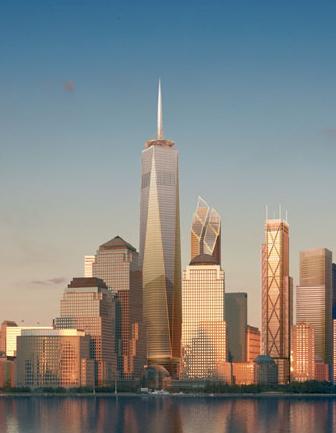 #0
Share your impressions... write something about the content...
Sixth anniversary of the attack on the World Trade Center