Portugal is the westernmost country in Europe. Every year, especially during spring and summer, thousands of tourists come here. In Portugal, there is not only what to visit, but also where to rest and relax, and this in the buzzing waves of the Atlantic. The country has a lot of interesting places to recommend. In this article we will present the most interesting attractions and monuments of Portugal, which you must see with your own eyes and visit. 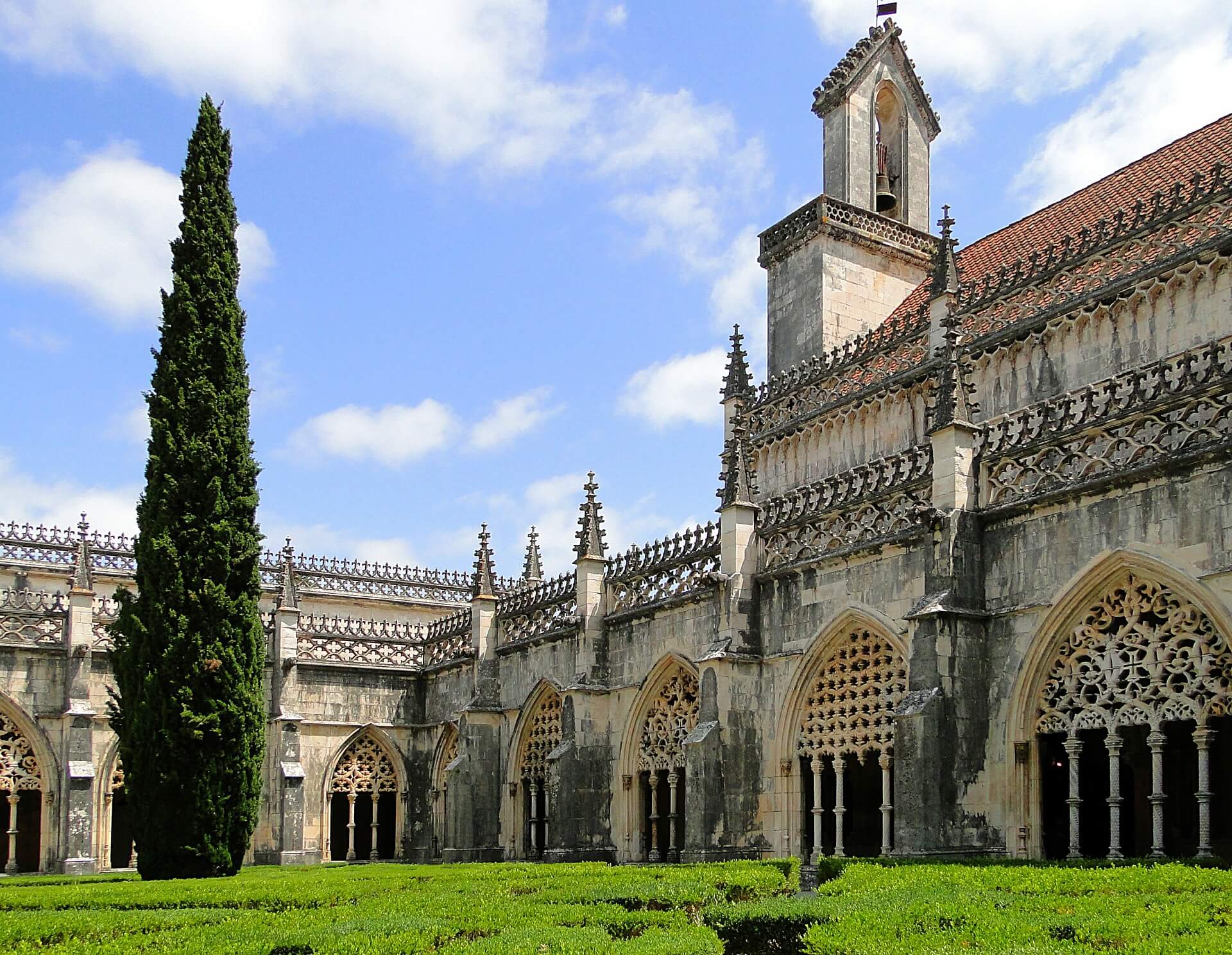 The Hieronimite monastery is considered to be a jewel of architecture of Lysobona, the capital of Portugal. In the 16th century, by order of King Manuel I, the construction of the Hieronimite monastery began as a token of gratitude for the successful completion of the Vasco da Gama voyage to India. The building was made in the traditional Manueline style, combining Gothic, Mauri and Renaissance influences. The interior of the monastery is a magnificent masterpiece of masonry. Many famous personalities are buried within the walls of the Hieronimite monastery, including Vasco da Gama, the poets Gerkulano and Fernando Pessoa, Luis Kamoens. In 1984 the building was inscribed on the UNESCO World Heritage List. 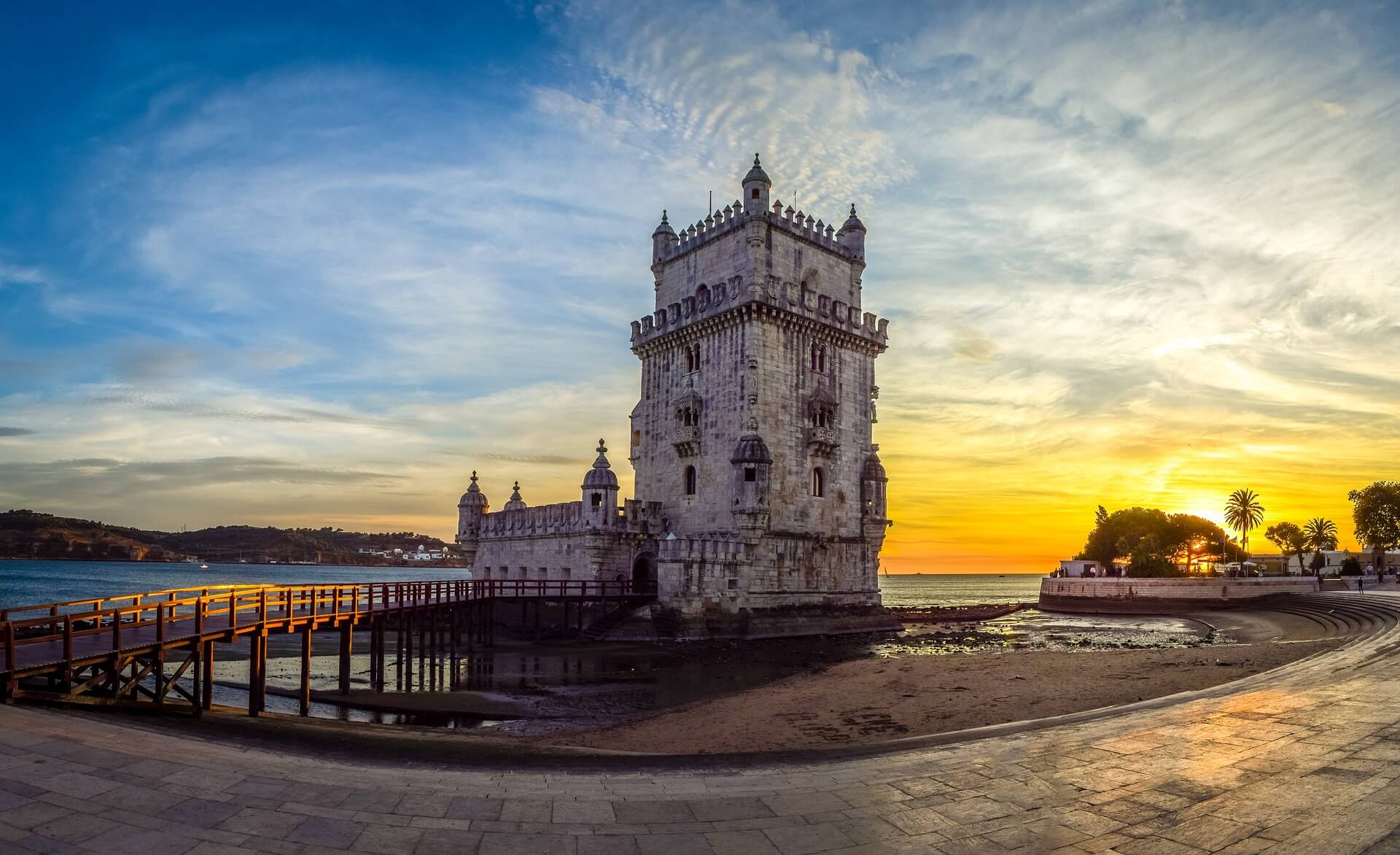 Belém Tower is a unique monument of Renaissance architecture. The Portuguese built a fort after the famous Vasco da Gama expedition. The tower was built between 1515 and 1521 by King Manuel I. Torre de Belém served as a prison and armoury. The tower is richly decorated with images, has openwork balconies, turrets in Arabic style. The building is 35 metres high and is considered one of the gems of Portuguese architecture. Since the 19th century, when the tower was renovated, it began to attract crowds of tourists. In 1983 Torre de Belém was included in the UNESCO World Heritage List.

Cabo da Roca - the westernmost point of Europe. At the top of the 140 m high rock is a lighthouse. The cape is located in the Sintra-Cascais National Park, 40 km west of Lisbon and 18 km from Sintra. The landscape of the opening Atlantic will delight even the most demanding tourists. There is a post office and souvenir shop on the lighthouse, where you can buy a copy of the reduced lighthouse or fragments of painted ceramic tiles.

25 de Abril Bridge is one of the longest suspension bridges in the world. The structure on the Tagus River connects Lisbon from the north with Almada in the south and was opened on 6 August 1966. Until 1974 the structure was called the Salazar Bridge from António Salazar, the Portuguese statesman and politician. The 2277-metre-long bridge absorbed more than 260,000 cubic metres of concrete and more than 72,000 tonnes of steel. More than 300,000 people use the structure every day. Scenes of several famous films were shot on the bridge, including "In the Secret Service of Her Majesty". (1969 r.). 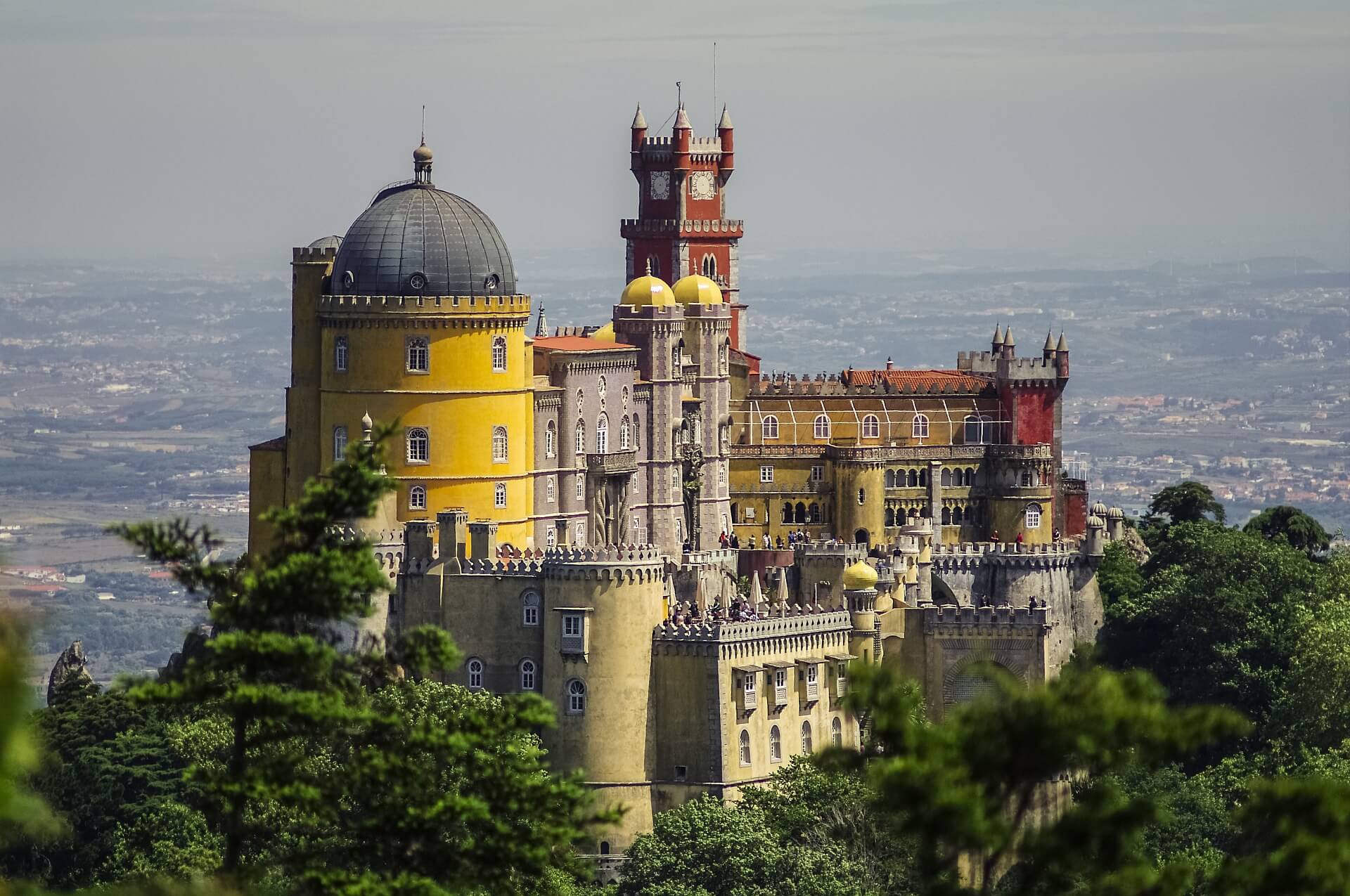 Pena Palace - one of the oldest European palaces, built in the Romantic era. The building in Sintra is on the list of the Seven Wonders of Portugal as well as the UNESCO World Heritage List. For several centuries the palace served as a monastery, where 15 monks lived. In 1755 strong earthquakes almost completely destroyed the building. For several hundred years the building fell into ruin. The second life of the palace began in 1838, when Ferdinand II, the husband of Queen Mary II, decided to buy the building. In the place of the ruins a summer residence of the Portuguese royal family was built. Pena Palace is a mixture of several styles and looks like it was taken out of a fairy tale. 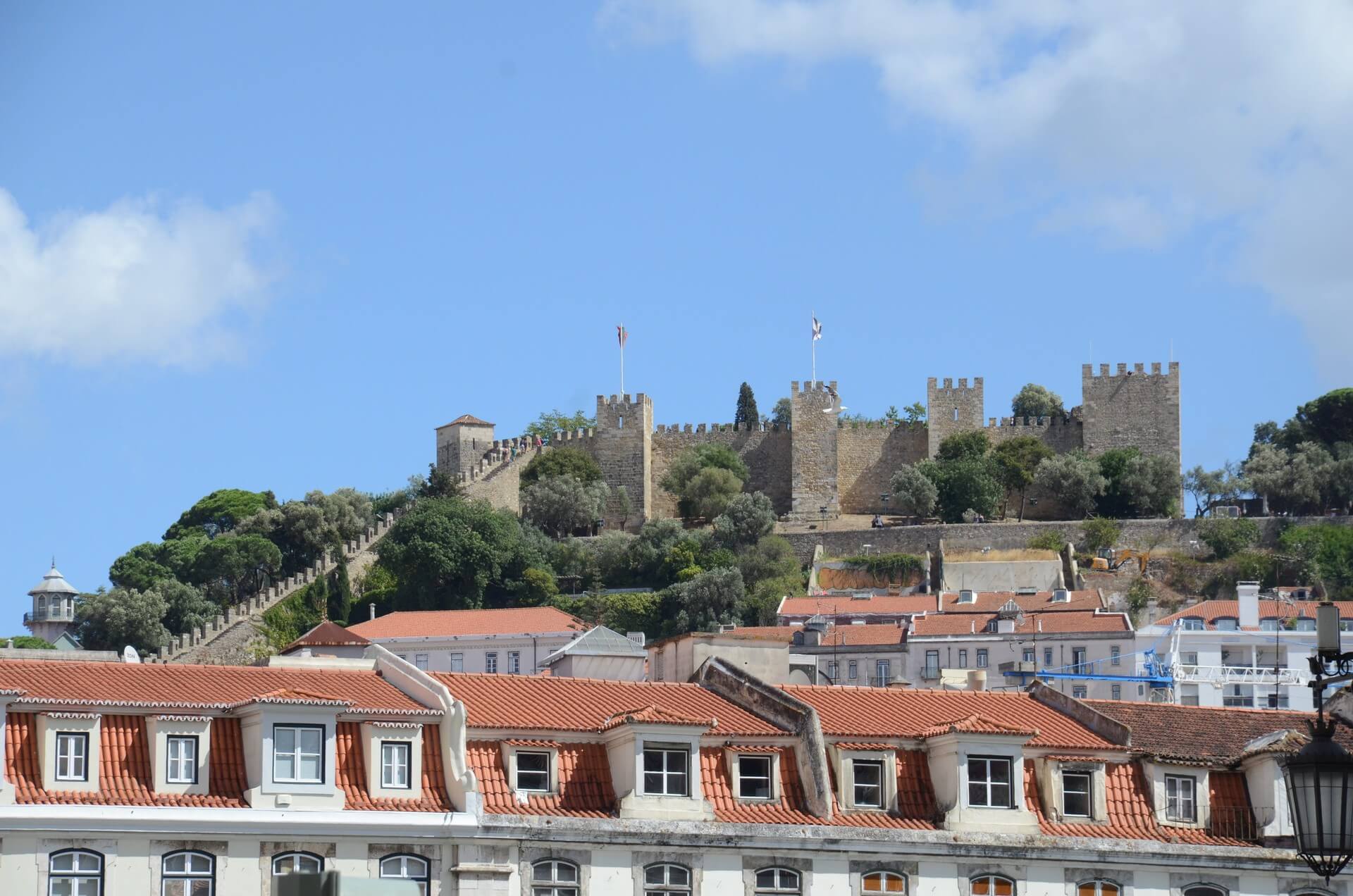 St. George's Castle is located in the historic city centre, on a hill in Lisbon. The locals often call it the "cradle of the city" because it is believed that this is where the history of the Portuguese capital began. Between the 5th and 8th century and until the beginning of the 8th century, the castle belonged to the western Goths, but then they occupied the Saracens. The present castle was built in the 12th century on the foundations of the previous building. After three hundred years, the fortress held a lavish celebration of the return of Vasco da Gama. After the transfer of the residence of the kings, the castle served as a theatre, a prison and an arsenal of weapons. Like many historical buildings, it was severely damaged by the 1755 earthquake. In the 1930s, the castle was reconstructed. Currently, the fortress is open to tourists, with a wonderful multimedia exhibition about the greatest events in the history of Lisbon. 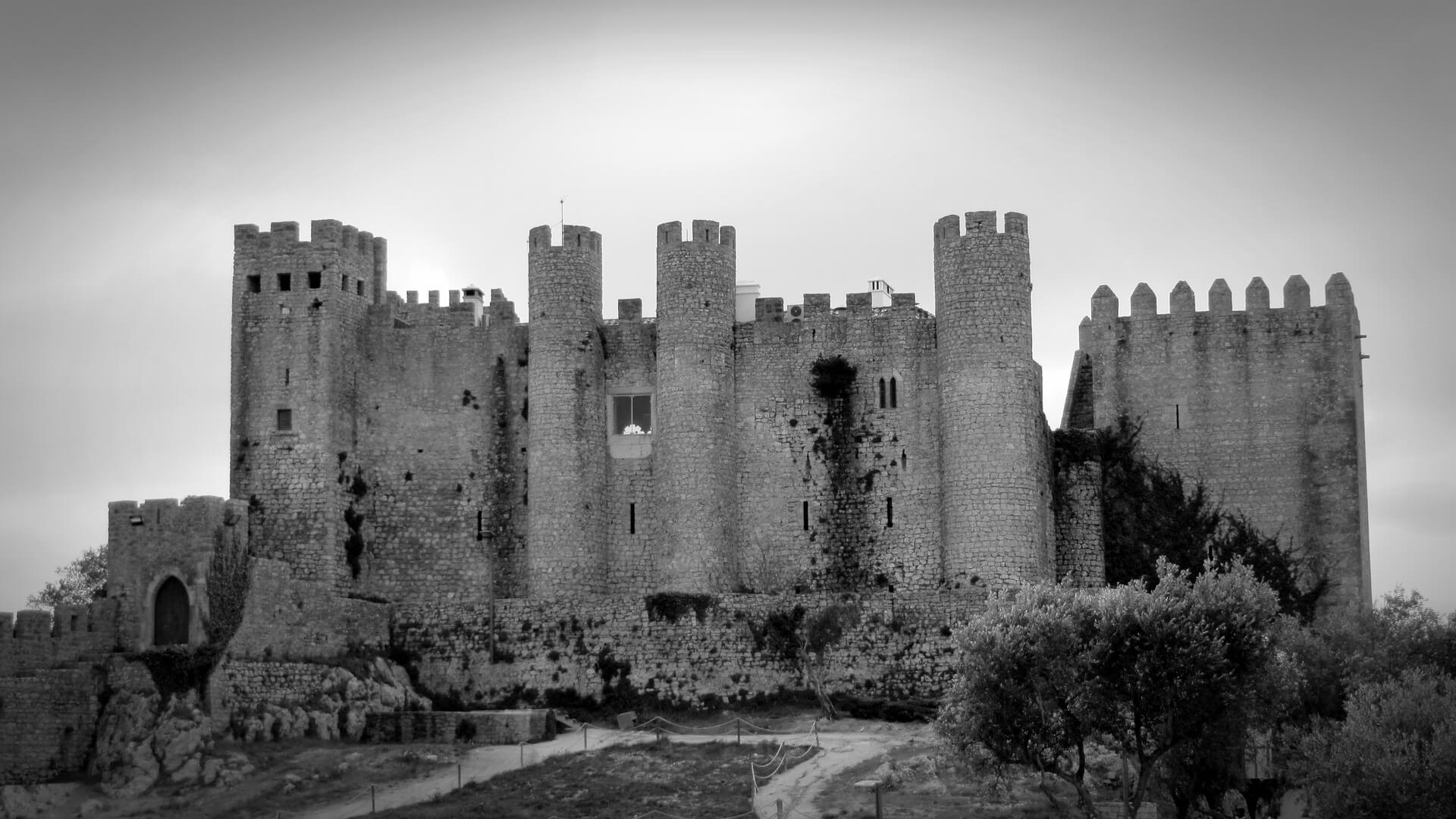 Obidos Castle - one of the most famous and popular historical monuments, built in the Manuelian style. The most interesting elements of the fortress are bastions and defensive walls. In some parts of the castle the original windows and arched pavements decorated with medieval reliefs have been preserved. The appearance of the castle is the result of the actions of various architects, and its condition is the result of wars and conquests. Today the Medieval Fair is regularly held in Obidos. Every year, newlyweds come here from all over the world to take pictures against the background of an amazing castle and spend their honeymoon. 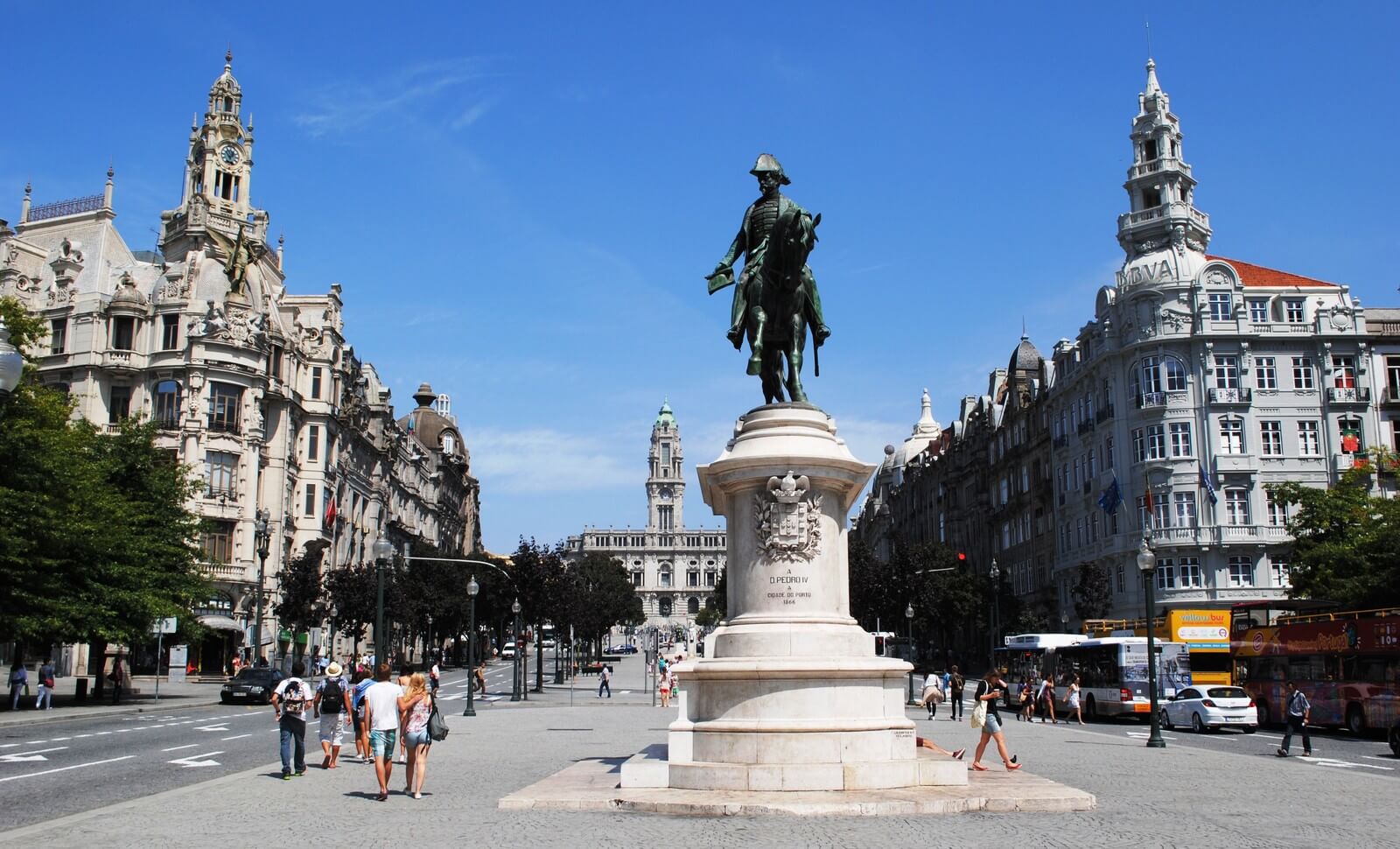 Freedom Square is located in the central part of the city, surrounded by many buildings built in the nineteenth and twentieth century. One of the main buildings in Liberty Square is Cardosas Palace. In the nineteenth century there were several significant changes that increased the value of the area - moving the municipality, building a bridge and a railway station. Plac Wolności was the political, economic and social centre in Porto. Today, banks, hotels, restaurants and numerous offices are located around Plac Wolności. 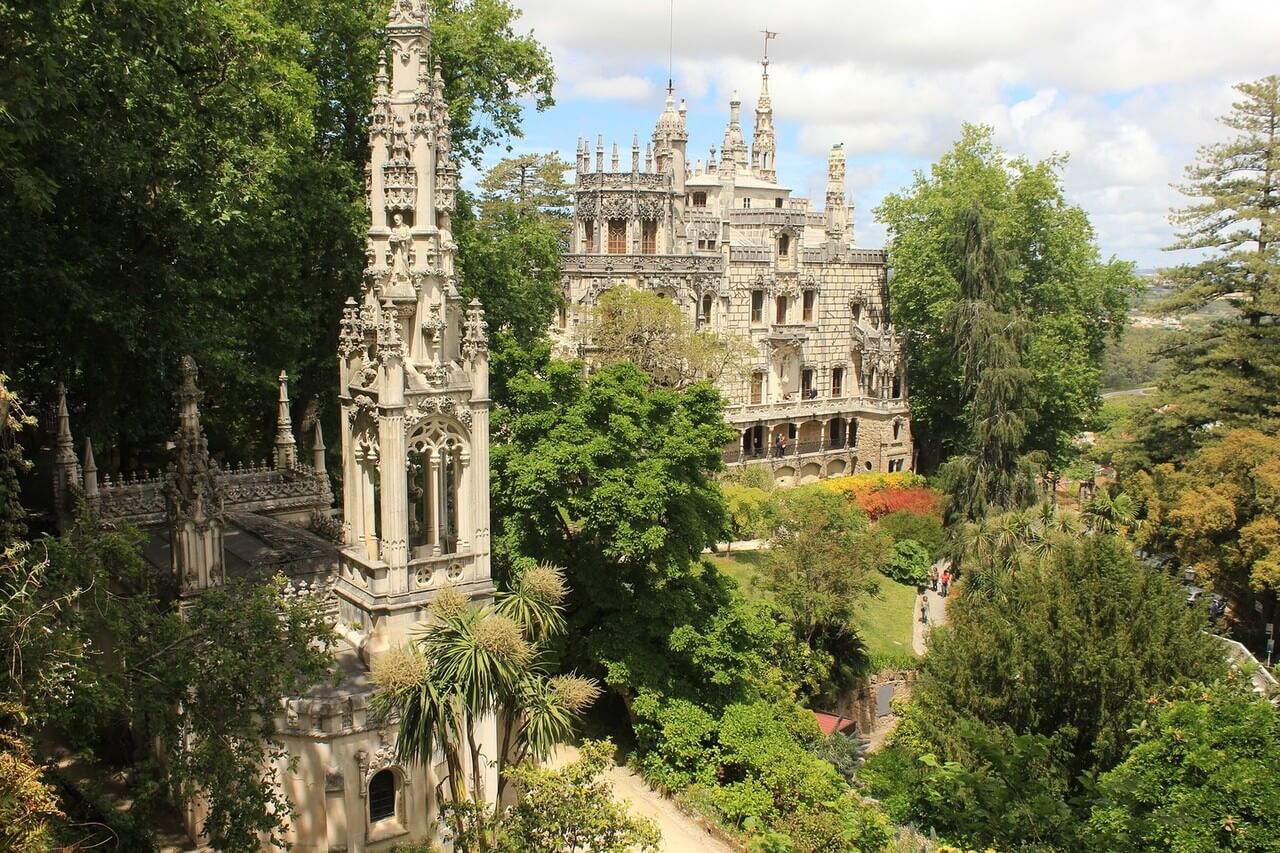 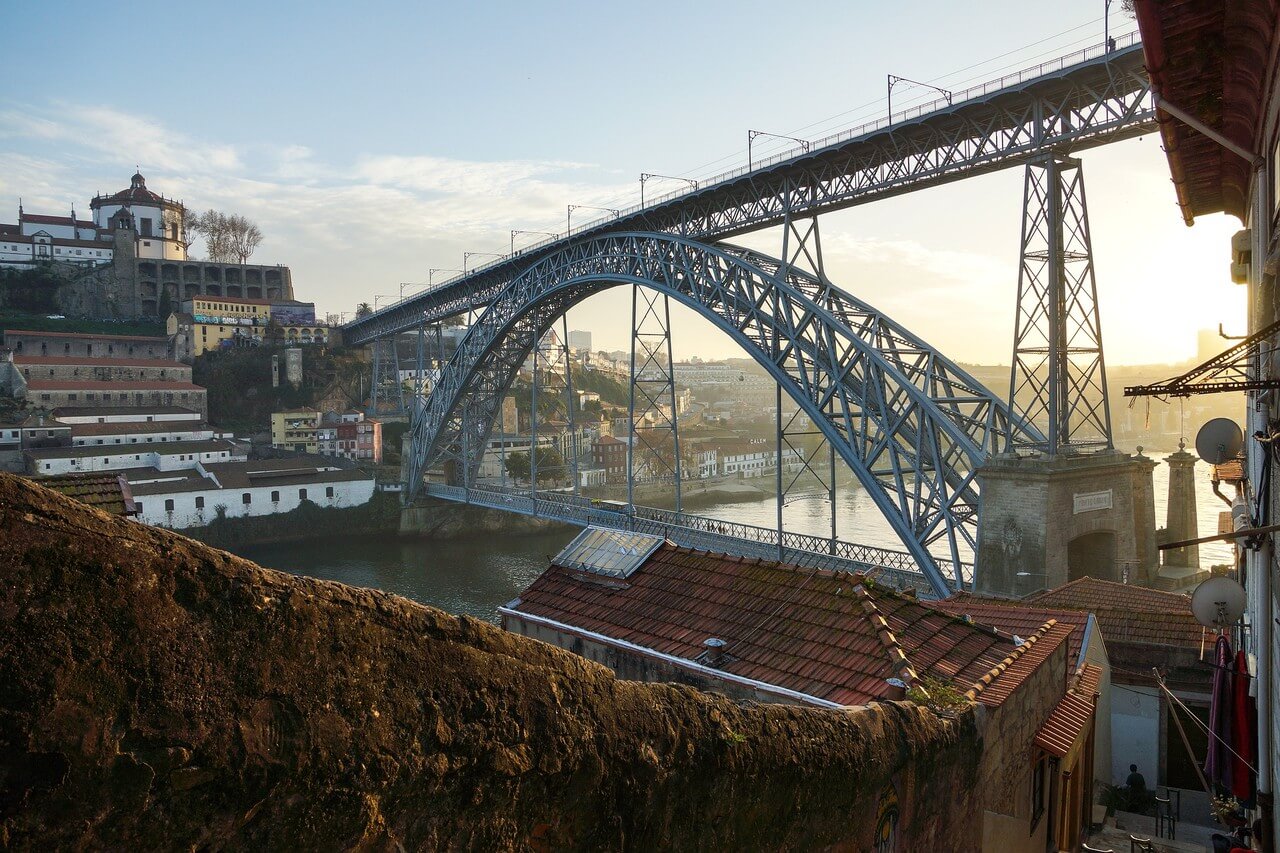 Dom Luis I Bridge is located in downtown Porto, just outside the Ribeira district. It has two sections: the upper section, from which you can admire the beautiful landscape and is also used by the railway and the lower section, which is used by pedestrians but also for cars. Ponte Dom Luis I divides the city into two different sides. On the one hand, the city center, Ribeira Square, and on the other hand, the municipality of Vila Nova de Gaia, which is famous for its amazing view of Porto. 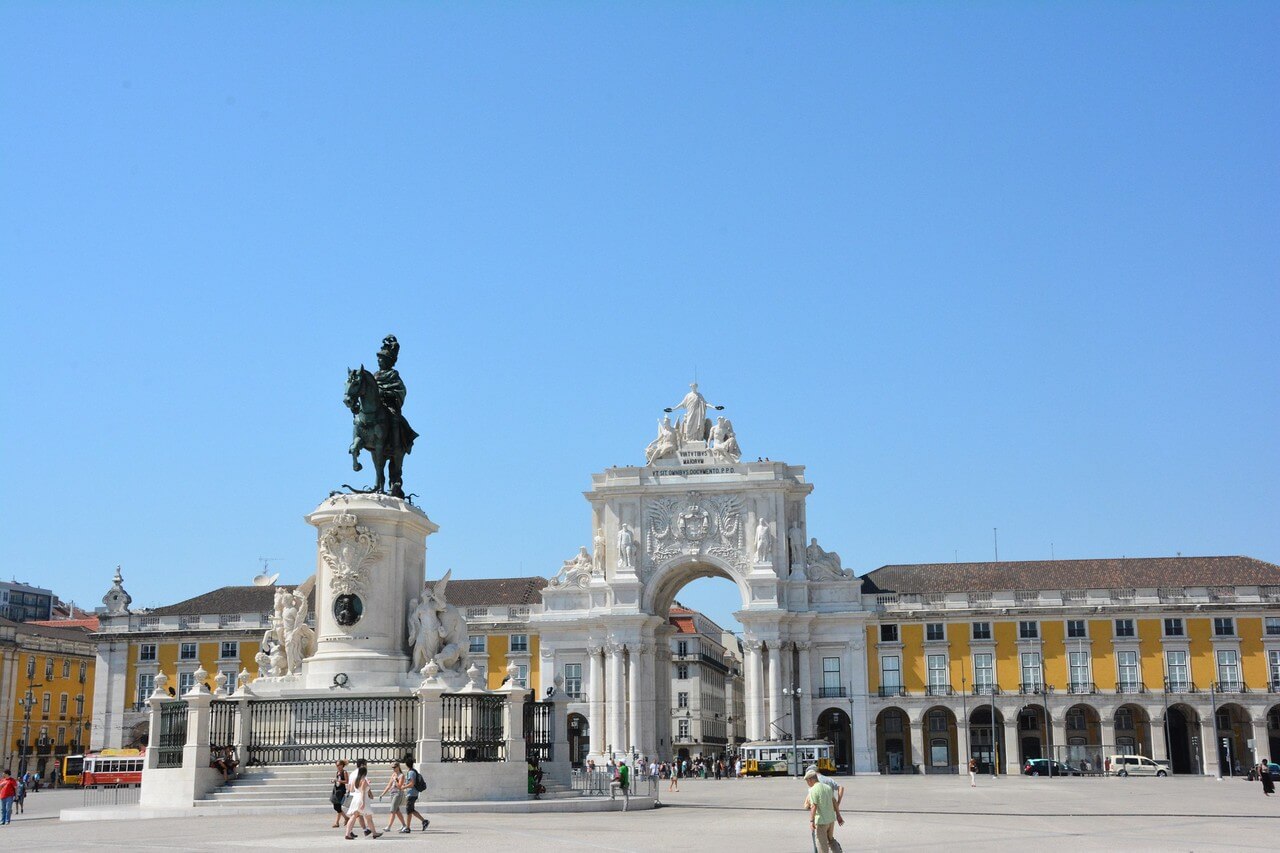 One of the most characteristic places in Lisbon is Praça do Comércio square, known to the locals as Terreiro do Paço, because before the earthquake of 1755 there was a palace here. This one of the largest squares in Europe is surrounded on three sides by characteristic yellow buildings in Pombaline style, and the southern side overlooks the Tejo estuary. The statue of King Joseph I stands in the middle of the square, while on the northern side there is the triumphant Arc de Rua Augusta, which leads to central Lisbon. 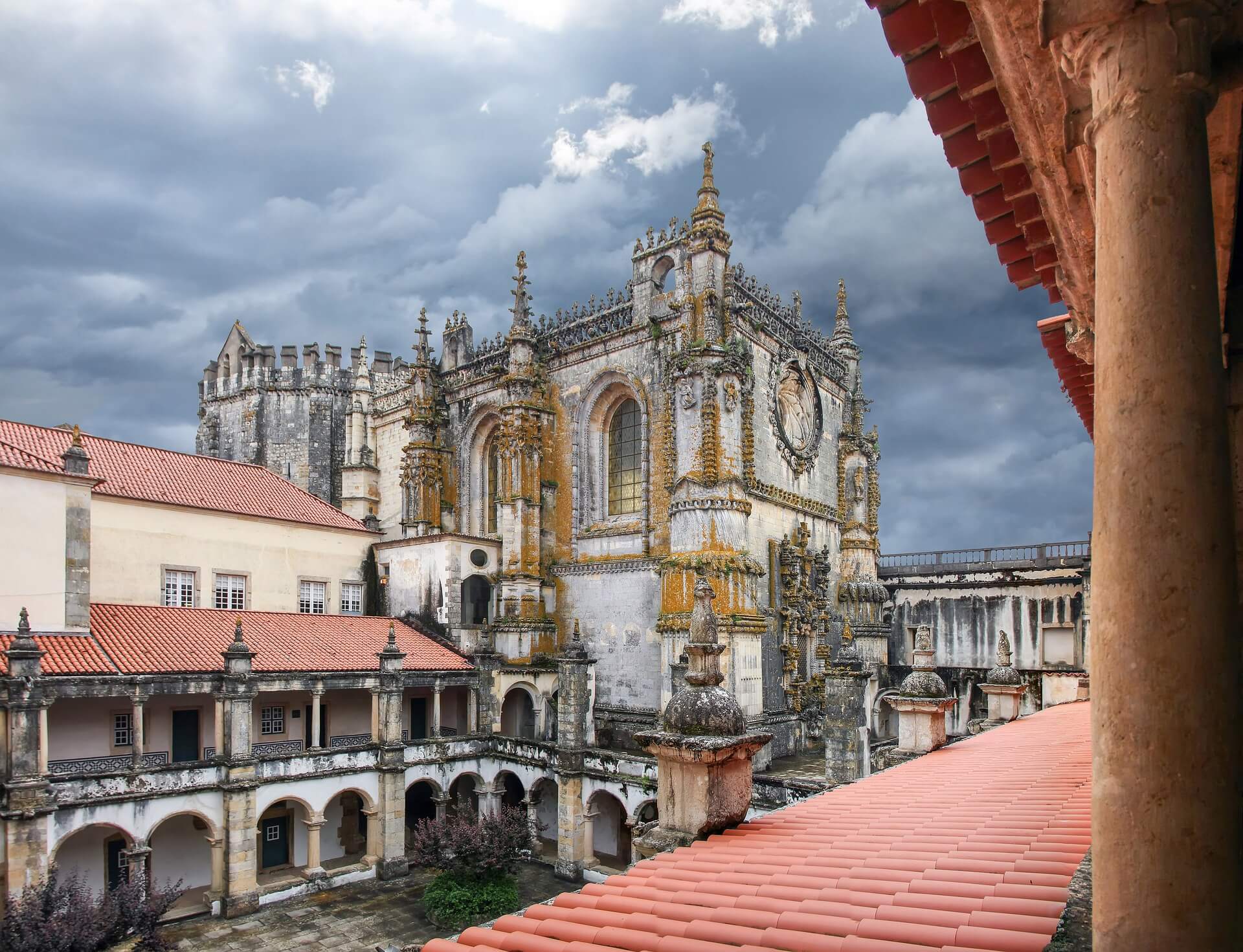 In 1983 UNESCO awarded the World Heritage Classification of the Templar Castle and the Knights of Christ Monastery in Tomar, a unique monument in the history of the Western world. Built on a site that was originally used for Roman worship, this huge monumental complex illustrates seven centuries of Portuguese history and contains several important memorials of decisive moments in the history of the Western world. Construction began in the 12th century and the castle-like appearance reveals the military origins of the Templars, their original builders and inhabitants.

Ponta de Piedade is a place near Lagos in the Algarve. This dramatic limestone coastline consists of sea pillars, delicate rocky arches and hidden caves, all of which were forged by wild storms. The cliffs of this cape are one of the most beautiful places in Europe and one of the biggest tourist attractions in Portugal. The beauty of the region is discovered only after descending from the cliffs, where exposed cliffs reveal their golden colour and turquoise sea waters are flown by balanced rock formations. 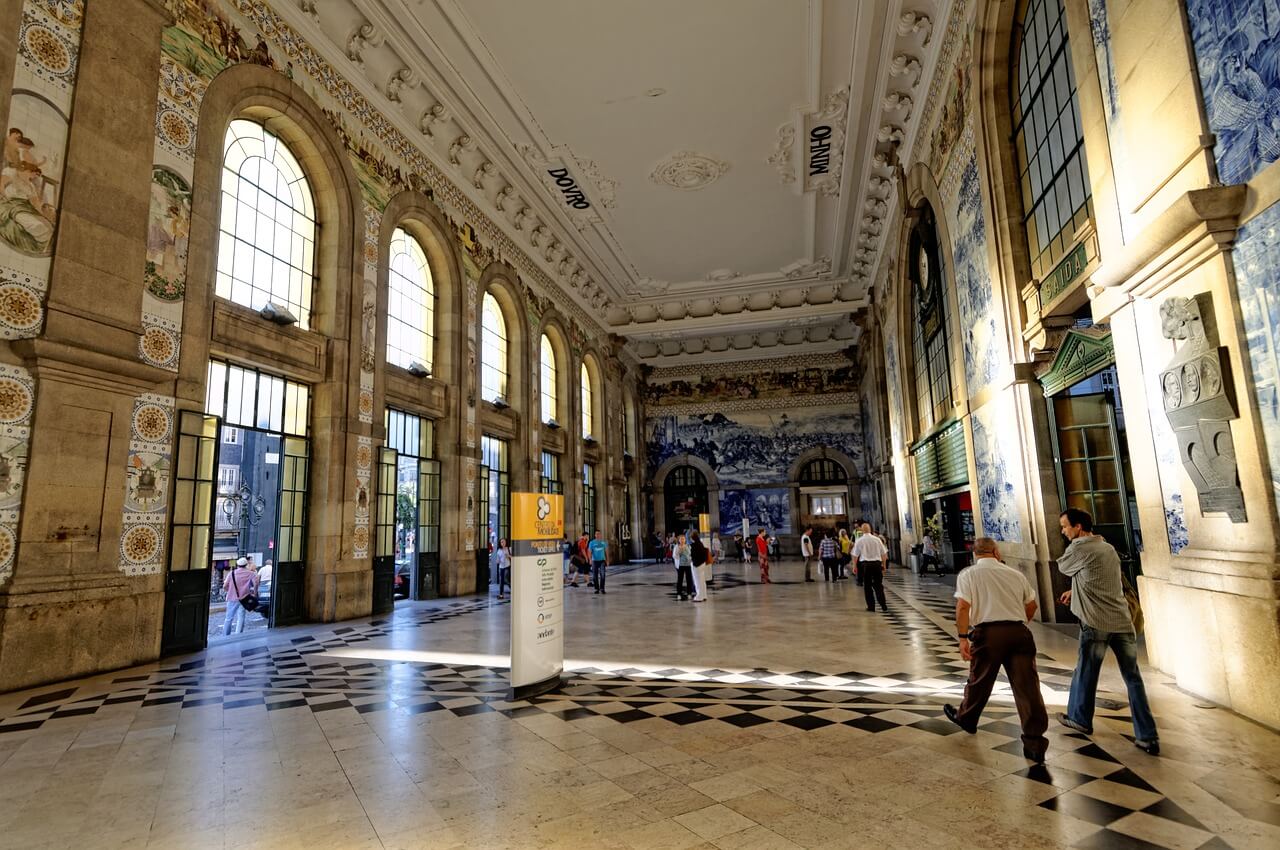 Sao Bento - one of the most beautiful railway stations in the world. The railway station in the city is named after the old Benedictine monastery of Sao Bento de -Ave Maria, where it was built and put into operation in 1916. The station welcomes travelers with shiny blue tiles, decorative panels and ornaments. The walls of the main railway station are decorated with mosaics and paintings depicting Portuguese history. There are more than 20,000 painted tiles on the walls, which made the station famous worldwide.