A high-rise kaleidoscope will be located in Warsaw's Wola district

One of the most original and tallest buildings in the capital will probably be at the Daszyńskiego roundabout - it will be a 170-meter tower with glazed loggias on the facade, which at night are to be illuminated with dozens of colors like a kaleidoscope.

The skyscraper is to be erected on a diagonal plot on the south-west corner of the Prosta and Towarowa intersection. In cross-section it will look like an egg - it was optimal arrangement of flats in relation to the world sides - explains Andrzej M. Chołdzyński, designer of the building.

The tone of the facade will give a characteristic "braid" of glazed loggias. In the lower part, intended for offices, the rhythm of the strands will be different than in the upper, residential (there the glazed cubicles will slightly protrude from the surface of the facade, like scales cones). Each of the loggias will be a small winter garden cooled in the summer and heated in winter, so that the vegetation blooms like in a greenhouse.

Even more interesting, the tower will look at night - a part of the windows of each loggia will be opalescent, with transparent foil on the inside, but on the outside it will give color. Thanks to this, after dark the building will glow with a range of colors from pale blue through green to gray. Hence the name of the building - Kaleidoscope, or kaleidoscope. - I dreamed about the fiery Spanish red, but the investor stops me in this enthusiasm - says Andrzej M. Chołdzyński. 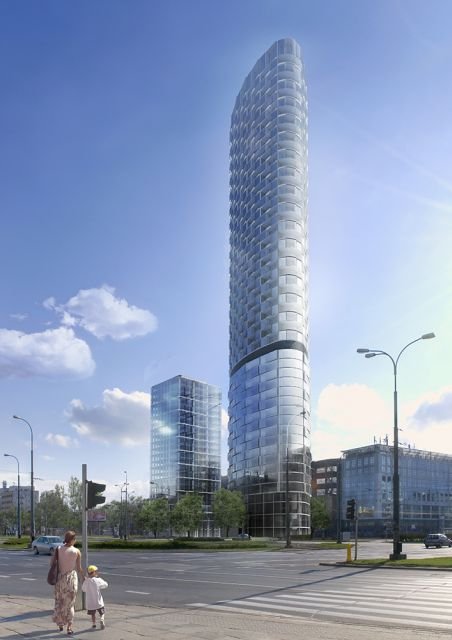 #0
Share your impressions... write something about the content...
A high-rise kaleidoscope will be located in Warsaw's Wola district